A walk of about three and a half miles from Stansted Mountfitchet to Turners Spring nature reserve and back. OS Explorer Sheet 195. Starting from Lower Street Car Park TL515249.

Footwear – After periods of heavy or lengthy rain areas of the route can become flooded, and as horse riders also use it these areas can be muddy. Suitable footwear is a major necessity. 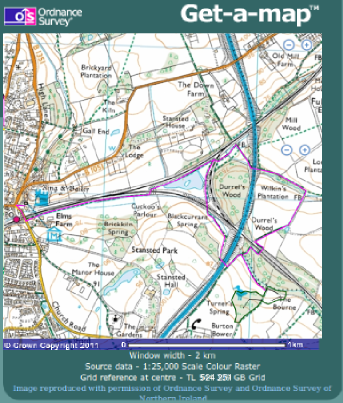 START from the Lower Street Car Park in the centre of Stansted, near the castle and railway station. Leaving the car park turn sharp Left to walk up the hill and over the bridge crossing the railway, keeping on the left hand pavement. At the point where the road levels out, take the signposted footpath going down the steps to become level with the railway track. Continue along this path noting Stansted Brook and Elm Farm to the right. Wildlife can be seen easily from the path. In wet winter conditions this whole field can turn into a lake, so best not to take this walk at that time of year.

The path continues alongside the brook until reaching a point where the London bound section of the airport rail link crosses it. Walking through the small tunnel under the railway tracks the path passes a large lagoon on the right. This attracts bird life and waterfowl. Continuing along this path to a bridge crossing the stream, cross over the bridge and take the right-hand path to walk alongside the raised bank of the Cambridge-bound airport rail link on the left. The path passes back under the first rail link and with Durrel’s Wood on the left (very good for Bluebells in Spring) continues until facing the M11 motorway, then bearing to the right and up an incline.

Near the top of this incline turn left to walk through a tunnel under the M11. Bear left at the exit of the tunnel and at a point just before entering a wood,  (note this point- you will be returning to it later in the walk),  turn sharp right climbing up a bank to the edge of a large farmed field. Keeping to the left hand edge of the field walk around this until reaching the entrance to the Nature Reserve 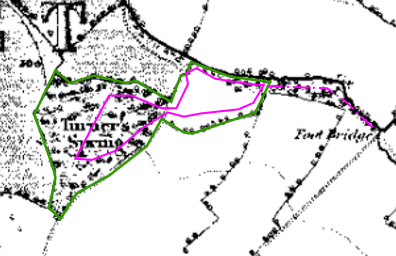 Turners Spring – Reserve Boundary in Green – Internal paths in magenta with suggested extension walk dotted. Note that the railway is not shown on this historic map

The Turners Spring nature reserve begins with a strip of woodland beside The Bourne, and the path follows this along to the far reserve boundary. If you are visiting in April the riverside is home to a display of Oxlips, but you will need to carefully descend down to the river, and then climb back up again. The Oxlips continue into the glade beyond the reserve boundary, following alongside the stream and appear to be seeding along the course of the river. Back inside the nature reserve turn away from The Bourne and follow the path around, back into the large meadow which is managed for wildflowers, and in season a wide variety of species can be seen here. The southern part of the reserve, climbing gently uphill, is a woodland, with good Bluebell displays in season, and also introduced Daffodils along the central ride. The wood also has a small population of the Oxlip, a local speciality of Uttlesford.

Once you decide to make the return journey, retrace the path leaving the nature reserve, back  along the field edge and down the bank, but at this point turn right into the wood, Follow the path through the wood and over the railway bridge to enter another large field. Keeping to the left-hand edge walk around this passing a communication mast and small wood on the right, At the end of the field where a pond may be seen on the right, turn left to walk along the edge of a field passing through a wood to meet another path. Passing through and shutting the gate turn left, follow this path through two more gates to enter another tunnel under the M11.